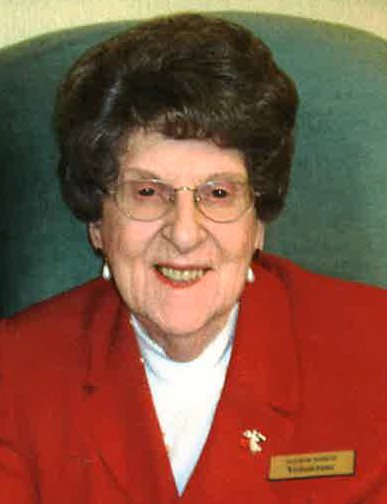 With saddened hearts and wonderful memories, her two daughters announce the passing of their mother, at the age of "94," at Erie Shores Hospice, Leamington.  She went to join the Love Of Her Life Clifford (2002).  She leaves behind daughters Fran (Gerard) Brouillette and Betty (John) Gamperl.  Dearest grandmother of Christine Brouillette (Dave Wright), Laurie (Eric) Hurst, and Jason (Alix) Brouillette.  Great-grandmother to Kyle, Kaitlyn, and Kimberly Hurst and Zoë and Ava Brouillette.  Predeceased by parents Edward (1989) and Elizabeth (1970 Durocher.  Daughter-in-law to Leon (1973) and Annie (1975) Thibert.  Dear sister to the late Pauline (2007)(late Rudy, 1985) Corbeil, Late brother Adrien (2010) (surviving wife Lillian) Durocher.  Sister-in-law to Alex (1947) (Angeline, 1998) Thibert, Henry (1988) (Rita, 2017) Thibert, Paul (2007) (Margaret, 2014) Thibert.  Dear aunt to serveral nieces and nephews.  As a young girl mom delivered groceries on the front of her bicycle for her dad's store in Belle River.  She also worked in the grocery stores in Tilbury.  She was known as Aunt Dee to many little children whom she took care of.  To this day some of the mothers still ask, "How's Aunt Dee".  In her late seventies and eighties she volunteered at Hudson Manor in Tilbury where she made many friends.  She spent the last ten years at Chartwell Retirement Home in Kingsville.  The family would like to thank all the workers and residents for their kindness.  Mom was a Catholic who went to the services at the home every Sunday and was also a member of the Catholic Women's League.  Mom and Dad enjoyed over 20 years at the cottage up north, fishing and partying with friends they made.  Due to COVID-19 there will be no visitation at this time and a private family service will be held.  Interment at St. Francis Xavier Cemetery, Tilbury.  In lieu of flowers, donations to Erie Shores Hospice  appreciated.

Share Your Memory of
Delia
Upload Your Memory View All Memories
Be the first to upload a memory!
Share A Memory