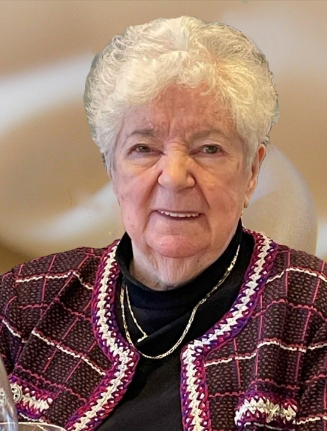 With heavy hearts, we announce Mary’s unexpected and peaceful passing at home on January 6, 2023. Loving wife of Richard (2012) with whom she shared 50 years of marriage. Treasured Mother of Winifred and Brian Burke, Eileen, Mary and Stephen Balsam, Gerald (1984), Henry and Jacqueline, and Emmett and Carol. Beloved Grandmother of Peter, Brigid, Charles and Joseph Burke; Gregory (Stacie), Patrick and Elizabeth Balsam; Madeline and Jessie Murchland; and Cassandra and Hayley Murchland. Dear sister of Harry (2018) and Margaret Murphy; Winifred and Francis Murchland; and John (1999) and Marion Murphy. The extended clans of Murphy and Murchland in-laws, nieces and nephews are left with fond memories of their sweet Aunt Mary.

Born in County Down, Northern Ireland, Mary completed her Nurse’s training in Liverpool and Manchester UK. She fell in love with Richard during a trip to Canada and they established roots in Southern Ontario where she worked as an RN in the local Hospital and Nursing Home and tended to her growing brood in Tilbury. Mom’s quiet demeanour belied a sharp intellect and quick wit. She lived a faith-filled and thankful life. She acknowledged joys and sorrows in equal measure through prayer. She was our greatest cheerleader, encouraging all of our artistic, academic or athletic endeavours. Her innate kindness was felt by anyone who met her. Her love will live with us for the remainder of our days.

A special thank you to C-K First Responders for their compassionate assistance on Friday, and to the community of friends and neighbours at the Elm Court condos for everything.

Visitation at Reaume Funeral Home Inc, 6 Canal Street West, Tilbury on Wednesday, January 11th, 2023 from 4:00 p.m. to 7:00 p.m. with CWL Prayers at 4:30pm, and a second visitation at St. Francis Xavier Church, 32 Canal Street West, Tilbury on Thursday, January 12, 2023 from 9:30 a.m. to 10:30 a.m..  Memorial mass will begin at 11:00 a.m., click on the following link to watch the livestream of the mass, https://www.eriestclairparishes.com/bilingual-youtube-mass-links followed by interment at St. Francis Cemetery at 12:15 p.m.  In Lieu of flowers, donation of choice can be made in her honour.  Online condolences can be shared at reaumefh@gmail.com.

Share Your Memory of
Mary
Upload Your Memory View All Memories
Be the first to upload a memory!
Share A Memory